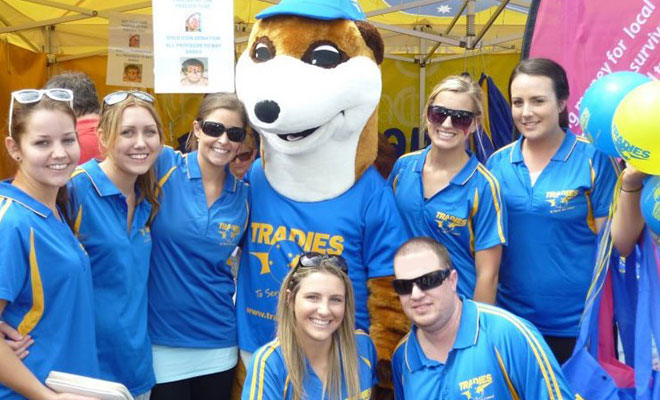 Established in 1960, the Sutherland District Trade Union Club (Tradies) has grown its membership base to over 46,000 and a profit margin of more than $6 million for the year of 2013.

Between the two Tradies venues, the club offers a brasserie, a Chinese restaurant, two cafés, high tea and a late night noodle menu. Entertainment can be found in the form of two state-of-the-art gaming rooms, bingo sessions, bridge, darts, snooker and dance classes.

This year, Tradies was recognised as an ABA100 Winner for Brand Excellence in The Australian Business Awards 2014.

Tradies wanted to create a public figure that personified the values of the club and represented the brand in the community. By establishing Max the Meerkat as the Tradies mascot, Tradies was able to engage with local children and, in turn, their parents.

Max’s World is an ever-expanding initiative that has proven highly popular with young children throughout the Sutherland Shire. As part of the branding initiative, both Gymea and Caringbah Tradies Kids Clubs were renovated and became Max’s World, with a mural showing off Max, his friends and his world. Colourful Max Packs were introduced to raise funds for charity. Max joined Facebook and began to accumulate friends who had met him at community events.

The popular mascot is also one of four “surf heroes” found on a Tradies-funded online surf education website developed by the local council for young children. The mascot initiative has increased brand recognition and community exposure, with sales of Max Packs raising more than $1,900 for charity and a third Max’s World venue to be created in 2014.