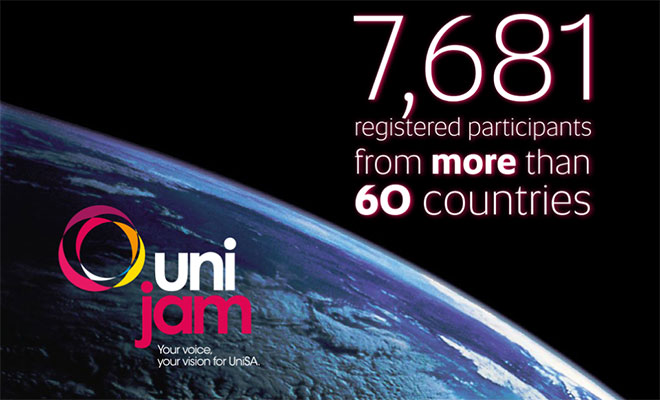 The University of South Australia (UniSA) is South Australia’s largest provider of higher education, with more than 33,000 students, 3,000 staff and 180,000 alumni. UniSA is a globally‐focused, locally‐engaged institution that continues to be ranked among the top 3% of more than 10,000 universities worldwide.

In 2010, UniSA released Horizon 2020 – a high-level aspirations document to guide UniSA over a ten‐year period. With the appointment of a new Vice Chancellor, Professor David Lloyd, the challenge was to identify the immediate and longer-term strategic actions that UniSA would need to take if it was to deliver the broad vision that had been set out in Horizon 2020.

The unijam initiative saw the University of South Australia honoured as an ABA100 Winner for Innovation in The Australian Business Awards 2014.

Using IBM’s collaborative technology, unijam provided staff, students, alumni and other key stakeholders with the opportunity to voice their opinions and contribute to the future direction of the University of South Australia. Overall, of the 7,681 staff, student, alumni and industry and community partners who registered to participate, 5,170 actively participated and enabled UniSA to collect the equivalent of approximately 20 years of input in just 38 hours.

“That we were able to harness their ideas through IBM’s online engagement platform and create the unijam collaboration has been so rewarding,” said vice chancellor Professor David Lloyd.

In addition to the development of a strategic action plan, based on unijam ideas, the University of South Australia conducted a “Quick Wins” survey where stakeholders were asked to vote on which five initiatives they most want implemented.

This resulted in a shuttle-bus pilot between campuses, a community garden project, a smoke-free university, the development of a UniSA app and student clothing merchandise. Unijam allowed the university to hear and speak to all its stakeholders simultaneously, generate a rich and diverse set of ideas in a very short space of time, and learn some valuable lessons about how to engage with its most important stakeholders – its students.