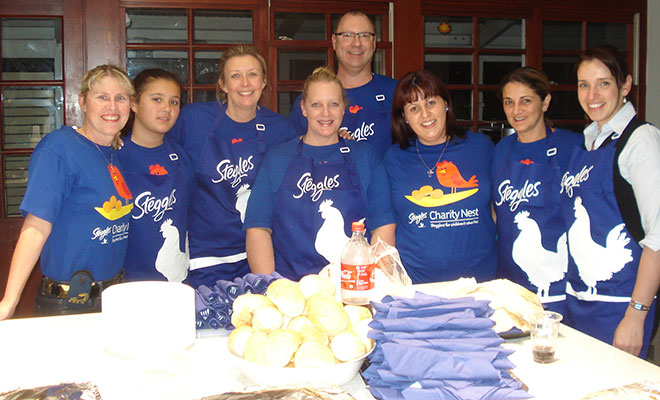 Baiada Poultry is a family owned and managed business employing over 4,000 people. Founded in 1943, Baiada Poultry is Australia’s largest poultry producer accounting for 39% of the poultry market. The business has always been actively involved in the community with initiatives such as the Charity Nest, and has recently been recognised as an ABA100 Winner for Community Contribution in The Australian Business Awards 2014.

Charity events range from BBQ’s, raffles and trivia nights to cooking competitions and give-it-up sponsorships. Steggles Turkey Shortcuts Team participates in fun runs to help motivate sponsorship and donations. In collaboration with rugby team The Sydney Roosters, sponsor Steggles developed the Little Stegglers initiative. Communication is sent out to Schools two weeks prior to the Roosters visit advising them to encourage their students to show community spirit and report what they’ve done in their community. The nominated students are rewarded for their efforts with general admission tickets to watch the Sydney Roosters at a home game as well a voucher to the Steggles shop.

“Our staff take a genuine interest in our charity program with many donating from their own salaries and volunteering at our charity’s fundraising events. We believe that this passion sets us apart,” Steggles brand managerLaurel Brown. These charity efforts combined have helped Baiada Poultry achieve their 2013-2014 target of raising $1,000,000 with a total of $1,400,000 raised to date for children’s charities.